Leaking taps and their constant drip, drip, drip, drip is annoying. We all know that about leaky taps. Then, there’s also how it hits us in the pocket when it comes to that water bill. Plus, it’s just a plain old waste of fresh water in an ever more environmentally-minded world.

But some of us are a bit nervous about doing DIY tap repairs. When it comes to fixing them, it’s nowhere close to being a minor problem. Changing a broken washer should be a little like changing a flat tyre. And it’s also possible that you need to think about completely reseating a tap that requires some special plumbing tools.

If you’re thinking about taking the DIY approach, read on; otherwise, a local plumber can fix leaking taps in an instant.

How To Change A Tap Washer

Changing a washer is pretty straightforward. In all honesty, a tap isn’t a complex piece of technology, and it’s only made up of a few simple parts. In most cases, you’ll be able to fix it with just a single session after a trip to the hardware store.

Please turn off the mains, and turn on the tap you’re going to work on to make sure it’s off!

Place a cloth over the sink drain to avoid tap parts falling and undo the head nut. It’s usually under a cap marking the tap hot or cold.

One option is just to put in a new tap washer, but there are other washers that you can change while you’re at it. We’re talking about the big one around the nut you just removed – the body washer. And there is also the spindle O-ring, which you’ll see once you wind up the tap thoroughly. To put in the new tap washer, which is probably what was causing the leak, slide it out with your fingers – you may need some small pliers.

4. Put It Back Together.

To do an excellent job, use some lubricant – some Vaseline will do – on the threads and spindle, and put Humpty back together!

Turn the mains back on and marvel at having fixed your leak!

What If My Tap Is Still Leaking After Changing The Washer?

If you’ve changed the tap washer and it’s still leaking, most likely, the valve “seat” that the tap washer pushes down on is worn. It allows water to pass no matter how much you tighten it. The tap valve seat, mostly made of brass, becomes worn and burred over time, mainly due to minerals in the water such as lime. Reseating a tap is grinding the seat to create a smooth flat surface to seal correctly with the washer.

How To Reseat A Tap And Use A Tap Reseating Tool

Re-seating a tap requires special tools, namely a “Tap Researcher”. Once the tap is dismantled, a tap reseater is placed over the tap valve seat and grinds or cuts the surface using a cutting disc and circular motion. If you’ve missed the seat, as in the handy picture here, installed the new washer, and you’ve still got a leaking tap, it might be time for a whole new stainless steel seat. 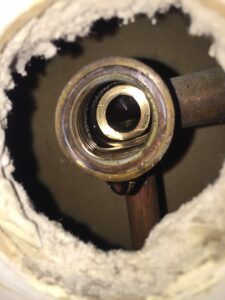 Did You Know This About Water?

The prevention, early detection and repair of water leaks can save you money. Not to forget, severe damage, headaches and frustrations also. And you can help conserve our precious water resources. So, if you’ve noticed any leaks in your residential and commercial properties, call a professional!

At Gold Coast Plumbing Company, reseating or replacing a tap is a swift job with the right tools, skills and experience. We are fixing leaking taps on the Gold Coast all the time. While we have the tap out, we also do a full tap service, including the spindle and the ‘O’ Ring, ensuring your tap is good today and long into plenty of tomorrows.

When it comes to reseating a tap or changing a washer, the best cure is, of course, prevention. So when you’re turning off that tap after brushing your teeth or watering the lawn: don’t over-tighten it! Once the water has stopped completely, stop closing the tap. Over-tightening can quickly cause severe damage to your taps that you may need a plumber to fix.

Don’t wait until the damages are worse. For all your other plumbing issues, call a professional plumber. And leave your plumbing needs and plumbing maintenance to the experts.

Trust only a fully qualified and licensed plumber for a reliable service. Especially, with your emergency plumbing problems. Rely only on the best!