As long as drains have existed, preventing blocked drains has frustrated those who maintain them.

Modern drains have come a long way, quite literally from their inception around 2800 years ago by the Roman empire. Designed to prevent the spread of disease by keeping waste water separate from fresh drinking water the Romans were the first to utilise a system of drainage to protect the health of it’s citizens.

Here on Australia’s Gold Coast, there are 3329 kilometres of sewer drains running under our feet worth an estimated $1.3 Billion and close to 250,000 sewer connections.

A large Australian home could have up-to half of a kilometre of waste pipes connecting fixtures like toilets, showers and sinks with various connections, junctions and bends in the system connecting your property to to the main council sewer drain.

It’s an interesting fact that every year 7 million mobile phones are dropped down the toilet and Americans use 433 million miles of toilet paper each year. We will in our lives spend an average of 3 years on the dunny and use of mobile phones has now overtaken reading as the most common activity while on the toilet.

When you consider the complexity of the waste pipe network in our homes it’s small wonder that there are little problems that need the attention of a plumber from time to time.

From this plumbers perspective, preventing blocked drains and sewer blockages occurring is as easy as following the 3 “P” rule. 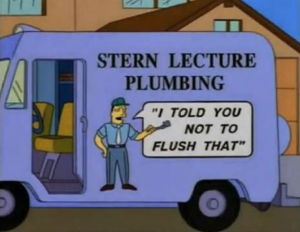 Give Goldie the gold fish the burial he deserves, keep the lid down and door shut so that the kids can’t see how well Spiderman can swim.

Next time the constabulary pays an unexpected visit throw your stash over the neighbours fence so they can enjoy it instead of flushing it away.

These all fair dinkum objects that have been removed from sewers. The puppy was accidentally flushed by an overly exuberant boy while bathing and thankfully was retrieved without harm, pardon the pun.

The problems caused by flushing items like the previously mentioned objects pale in comparison to the cost and resources required to address the number 1 cause of preventable blockages in pipes. The dreaded “Flushable” wipes.

120 tonnes of wipes are pulled from South Queensland sewer drains each year. Laid out they would stretch from Australia to New Zealand.

The wipes bond together with the grease and fat of the sewer system to create enormous “Fat Bergs”.

A fatberg as heavy as 11 double decker buses was discovered in a London sewer, that’s 130 tonnes!

The problem is not just in the council sewer system but in our Australian homes as well. The wipes get stuck on imperfections inside the pipes, tree roots or in dips and bends where grease and fat have accumulated. They then bond to more wipes as they are flushed and pretty soon the pipes becomes completely blocked.

So the solution to preventing blocked drains in the first place is simple if you stick to the 3 “P” rule and don’t flush “Flushable” wipes. If you do find problems with your drains, we have some DIY tips for unblocking drains or get in touch and we’ll take care of Gold Coast blocked drains for you!

Water Filters – Drink in the Possibilities!

Our great City’s water and sewerage infrastructure delivers safe, high-quality water to households and businesses across the Gold Coast. Whether you choose to further filter your household’s tap water is up to you. As is the choice of filtration system you use. But maybe like most of us you take your clean tap water for […]

Are You Cooking Up A Kitchen Reno?

So, you want a new kitchen? Every morning over a hot cuppa you’re reminded that your kitchen needs a little (or a lot of) love. Whether it’s a few additions to freshen up the hub-of-the-house or a full on knock down, drag out, ‘eat takeaway for weeks, while the dream kitchen takes shape’ scenario, the […]

Bathrooms – Trends, Reno Tips & Costs, and Signs You’re Due a New One!

We’ve all spent far too much time at home over the past few months. And, whether it’s the lounge room, the master bedroom, the games room, or the kitchen or one of the bathrooms, you’ve probably cast a critical eye over them and let your mind wander for a few minutes of what you might […]

Gold Coast Plumbing Company
4.7
Cathy Alexander
06:32 19 Jan 21
Great service. Advised of options. Reliable. Definitely use again.
Darlene Windleborn
06:01 19 Jan 21
Jake was a great guy, quoted us for what we needed, did half the job, as all wasn’t ready, will be getting him back to do remaining, when ready
Jay Potter
05:52 18 Jan 21
Very professional and explained in good detail this issues and the solutions.Would definitely use again
Marilyn Barton
00:09 15 Jan 21
Replaced out door tap and advised on replacing old water cartridge filter. Andrew was courteous and professional. Will be using this company again
Harkirat Kaur
05:57 12 Jan 21
Dennis Cardakaris
01:49 12 Jan 21
Jamie was next door repairing a badly blocked drain. Done that in double quick time. Just asked him a question and he gave me the right information. No strings attached. Gentleman.
Brett Cason
06:41 11 Jan 21
carol lennon
01:18 08 Jan 21
Jamie contacted me 30 minutes before arriving, as promised.He was on time and found my problem quickly and gave me thename of an electrician to fix my problem.I liked the fact that he had "CleanBoots" covers for his boots instead of having to remove his boots every time he came into the house.Will definitely recommend the company (and Jamie).
joanna
22:55 07 Jan 21
New shower and basin fitted. All taps replaced. Looks like a new bathroom. Excellent workmanship
Masami DAMON
08:51 07 Jan 21
Debra Bryan
02:47 02 Jan 21
MICHELLE TAYLOR
07:41 22 Dec 20
Excellent job, well done and friendly service
Captain Lanton
07:23 21 Dec 20
We had 3 toilets in our house replaced. The plumbers were very professional, phoned before arrival, friendly and efficient. Also, they cleaned everything up after the job was complete. I highly recommend using Gold Coast Plumbing Company to anyone! Thank you.
Leigh Symes
22:06 14 Dec 20
Hot water system repair & advice
Anne Brimson
04:08 11 Dec 20
Excellent service. Would definitely use this company again
Steve Files
04:00 10 Dec 20
Contacted Gold Coast Plumbing when the Hot Water System stopped working and they diverted a technician to come between jobs to check it. He was able to fix it on the spot. Their customer care and support cannot be faulted.
Kym Smith
09:33 09 Dec 20
Brent from Gold Coast Plumbing Company was very professional, hard working, extremely polite, very knowledgeable and supplied and installed hot water system, new toilet and beautiful vanity. I highly recommend Brent & Gold Coast Plumbing company for all your plumbing needs. Stephanie and Kirsty, office administrators were fantastic and helped me every step of the way. Super Professional & wonderful people. Thank you Brent, Stephanie, Kirsty and the rest of the team. Talk soon to get other things done in my unit. 5 / 5 stars. Exceptional.
James L
03:26 09 Dec 20
First time ever booking a plumber, booking was easy and straight forward! We needed our new gas stove converted to LGP and connected, plus a new drain and water outlet.We had Andrew, Andrew was on time, friendly, helpful, diligent and professional. Definitely a valuable asset to the business. Thanks again Andrew!I like the process of quoting, accepting the quote and getting the work done in the same visit. Obviously this may not be always the case for larger or more complex jobs.Thanks again guys.Talk to you when we need a plumber in the future.Thanks
Dave Stern
20:54 08 Dec 20
Quick and easy to deal with. A1 quality work
Leonie Jenkins
04:21 08 Dec 20
Great company to deal with I highly recommend with all things “Plumbing “ you won’t be disappointed thank you Andrew Kelk
Next Reviews
See all reviewsWrite a review